About Space Rocket Launch (in brief)

A rocket is an air-, spacecraft or any vehicle that is thrust by jet power (e.g. rocket engines) and looks like a huge missile controlled by a human. During the last 8 centuries, these have been used in scientific, industrial and interplanetary fields, widely extending our capabilities. Today they allow us to accomplish such significant achievements of humankind as spaceflights and cosmos explorations.

In the modern world, the word ‘rocket’ itself may describe a variety of flying objects from holiday firecrackers to complex space vehicles.

Below you will find a compilation of most spectacular rockets launches we’re found on YouTube – enjoy!

The view can be switched in the properties section. The action starts at 21:49.

This launch can undoubtedly be called a historical moment. Having performed this liftoff, Falcon Heavy has become the most powerful operational rocket in the world that can lift into orbit more than twice the payload of the next operational vehicle (the Delta IV Heavy) at one-third cost.

And yes, this is the one with Tesla car orbiting the Earth:) 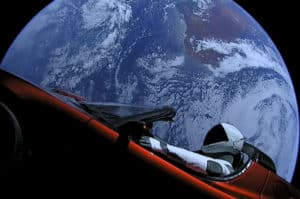 This blastoff was performed by Rocket Lab as the first commercial launch of the company.

Our next video can make you feel a little dizzy but it’s captured with GoPro camera and is available in high quality. Check out the amazing view at the Earth from the orbit!

NASA robotic spacecraft, Complex-37, was recently launched for a mission to the surface of the Sun. The main goal of this mission is to study the solar activity that might impact life on Earth. In other words – this is the first-ever mission to “touch” the Sun!

In this short but unique video, we can see a Russian rocket blastoff as seen from a space station!

Jeff Platt from BakersfieldNow has witnessed the Space X Falcon 9 launch as the rocket striped across the night sky.

Space Shuttle is a reusable spacecraft system developed by the U.S. National Aeronautics and Space Administration (NASA) to perform cargo transportations to Low Earth Orbit from 1981 to 2011. The system was retired from service after 135 missions with Atlantis making the final landing at the Kennedy Space Center on July 21, 2011.

Being a part of the NASA’s Space Shuttle Program, their missions consisted of:

In total, 5 Space Shuttles and one prototype were constructed

Enterprise (OV-101) – was the first shuttle prototype to perform atmospheric test flights, but not capable of spaceflights. Interestingly, it was originally planned to be named Constitution (to celebrate the 200th anniversary of the U.S. Constitution), but Star Trek fans insisted on naming the vehicle after the television show’s fictional starship and so, the US President, Gerald Ford, has directed NASA officials to rename it to Enterprise.

1. Columbia (OV-102) has become the first operational orbital vehicle with a total of 28 flights made. It was named after the sailing ship of an American sea captain Robert Gray, known for completing the first American circumnavigation of the world. The last flight and Columbia’s disaster happened on February 1, 2003, destroying the spacecraft and killing all seven crew members on their way back home.

2. Challenger (OV-099) was the second operational space shuttle system, having performed 10 spaceflights in total. The name was borrowed from a British Royal Navy corvette ‘HMS Challenger’ used in the late 19th century during a global marine research expedition. From April 1983, Challenger has made 9 successful liftoffs and landings before the fatal flight on January 28, 1986, known as Space Shuttle Challenger disaster.

3. Discovery (OV-103) was NASA’s third reusable launch vehicle having performed a total of 39 spaceflights from 1984 to 2011. The name Discovery was selected to continue the tradition based on ships of exploration, particularly HMS Discovery, commanded by Captain James Cook. Having launched a known Hubble Space Telescope in the Low Earth Orbit, Discovery has gathered the most spaceflights than any other spacecraft to date.

4. Atlantis (OV‑104) was the fourth shuttle orbiter vehicle developed by Rockwell International fulfilling the objectives for NASA’s Space Shuttle Program. With the total of 33 flights, Atlantis performed its last landing in July 2011 being the pre-last shuttle built.

5. Endeavour (OV-105) is a retired orbiter vehicle and is the final operating shuttle commanded by the U.S. National Aeronautics and Space Administration. The construction of Endeavour was initialized to replace Challenger shuttle after its disaster. The decision was made to build it from spares rather than re-supplying Enterprise prototype. The shuttle performed a total of 25 spaceflights, with the final mission to the International Space Station in May 2016.

The vehicles displayed in the video are as follows:

Feel free to leave comments in the section below and hope you enjoy our selection!

In Thrust We Trust!