Just like any other astrophile out there, I got my breath carried away by the Interstellar movie (2014) directed by Christopher Nolan, which became #1 most discussed and shared film of 2014.

Recognized by millions of people as a brilliant work of art, Interstellar has won the Academy Awards (87th) for Best Visual Effects and nominated for 4 other categories among the competing movies.

The storyline of this sci-fi masterpiece shows us a dystopian future of life on Earth, where a group of astronauts undertakes the most important mission in human history – to travel beyond our Galaxy through a newly discovered wormhole in space in an attempt to ensure humanity’s survival.

With that being said, I’ve prepared a list of the most famous Interstellar quotations to excite and inspire you at the time of need. 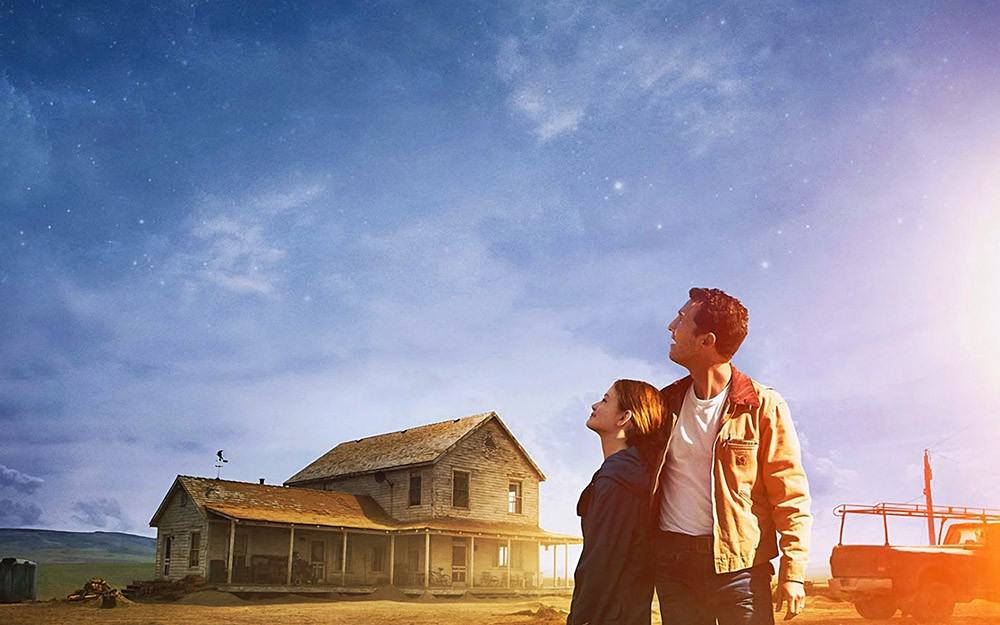 Part 1. Quotes about Life on Earth

The following quote list was said by the main character of the movie – Joseph Cooper, (starring Matthew McConaughey) a widowed engineer and a former NASA pilot, leading the expedition.

“Mankind was born on Earth. It was never meant to die here.”

“This world’s a treasure, but it’s been telling us to leave for a while now.”

“We’ve always defined ourselves by the ability to overcome the impossible. And we count these moments. These moments when we dare to aim higher, to break barriers, to reach for the stars, to make the unknown known. We count these moments as our proudest achievements. But we lost all that.
Or perhaps we’ve just forgotten that we are still pioneers. And we’ve barely begun. And that our greatest accomplishments cannot be behind us, because our destiny lies above us.”

“Mankind’s next step will be our greatest.”

“Murphy’s Law doesn’t mean that something bad will happen.
It means that whatever can happen, will happen.”

– Cooper
explaining the Murphy’s Law to his daughter Murph

“The Earth looks amazing from here.”

— Cooper
Transmitting the first message to his family from space 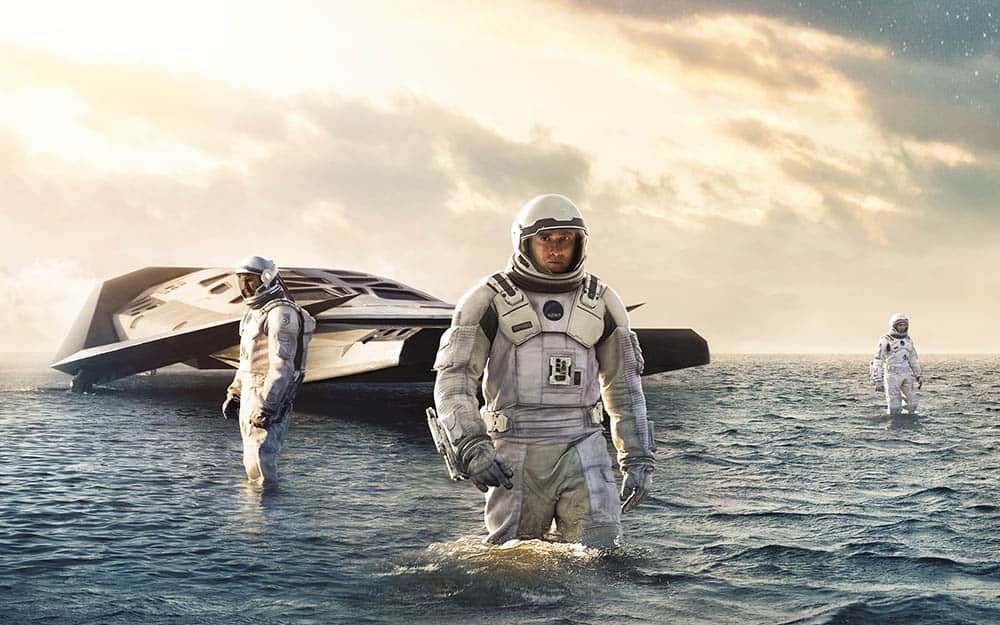 “Do not go gentle into that good night;
Old age should burn and rave at close of day.
Rage, rage against the dying of the light.”

— famous lines from “Do not go gentle into that good night” by Dylan Thomas,
as quoted by Professor Brand

“Everybody ready to say goodbye to our Solar System?
-To Our Galaxy.”

— Cooper and Doyle
before entering the wormhole

“What was that?
-First handshake.”

— Amelia and Romilly
while entering the wormhole

“So how do you plan on saving the world?
-We’re not meant to save the world, we’re meant to leave it.”

— Cooper and professor Brand
about their cosmic mission

“Newton’s third law. You gotta leave something behind.”

“You’re not listening to this, I know. All these messages are just, … drifting … out there in the darkness.”

— Tom Cooper
transmitting his last message to his dad 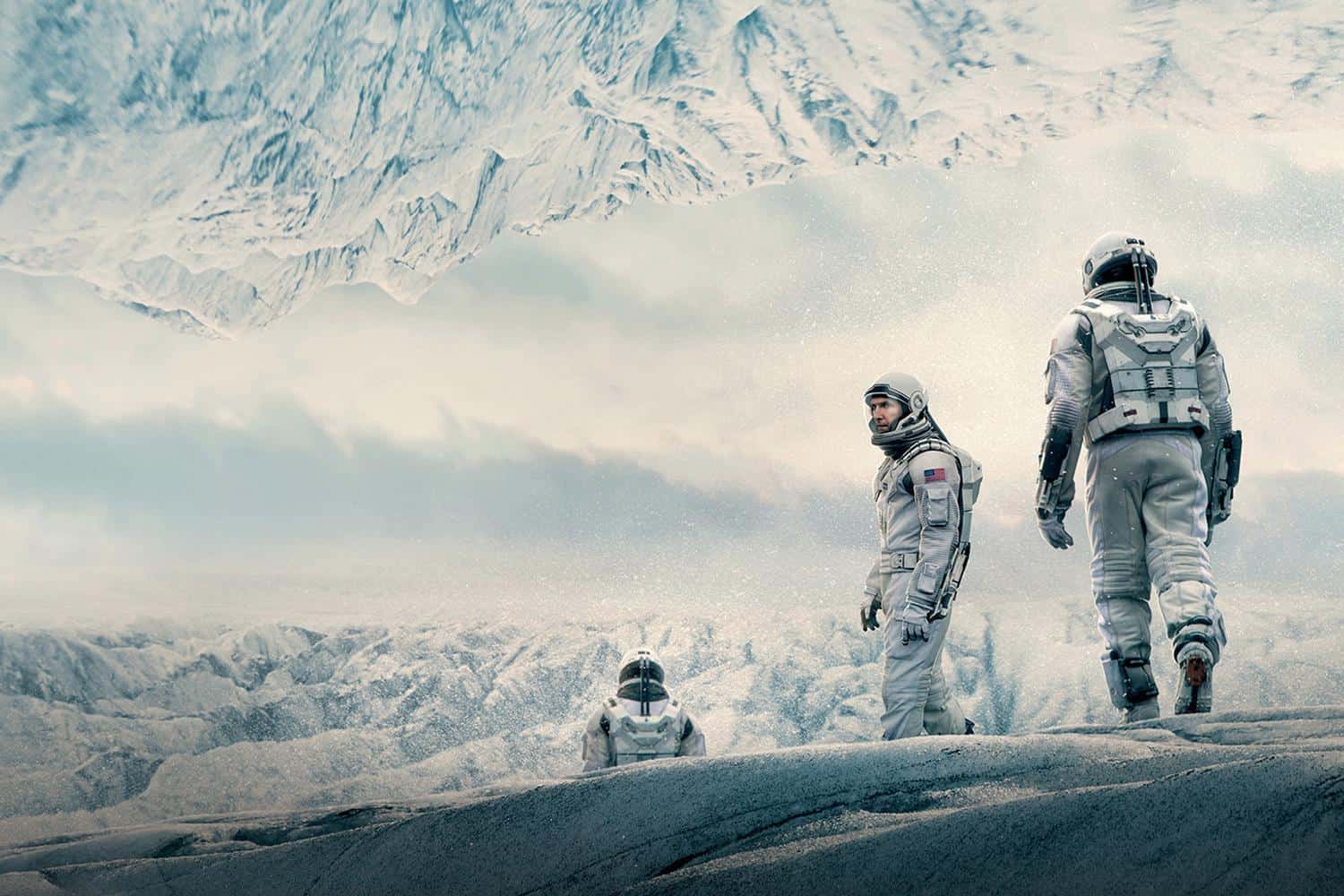 “Maybe by the time I get back, you and I, we might be the same age. You and me. Imagine that.”

— Cooper talking to Murph
before leaving for the mission 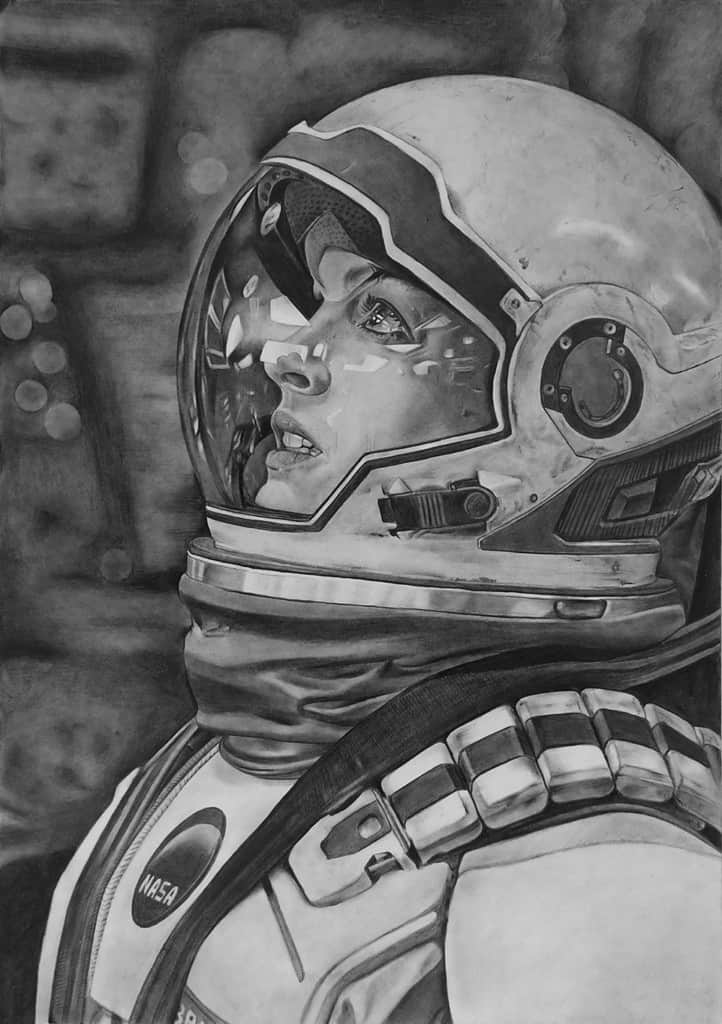 “Time is relative, okay? It can stretch and it can squeeze, but… it can’t run backwards. Just can’t.
The only thing that can move across dimensions, like time, is gravity.”

“I have an itch, heading back to base.”

*Interesting fact: the “Miller Planet” scene was filmed in Iceland.

“Maybe we’ve spent too long trying to figure this out with theory.”

“I’m not afraid of death. I’m an old physicist. I’m afraid of time.” 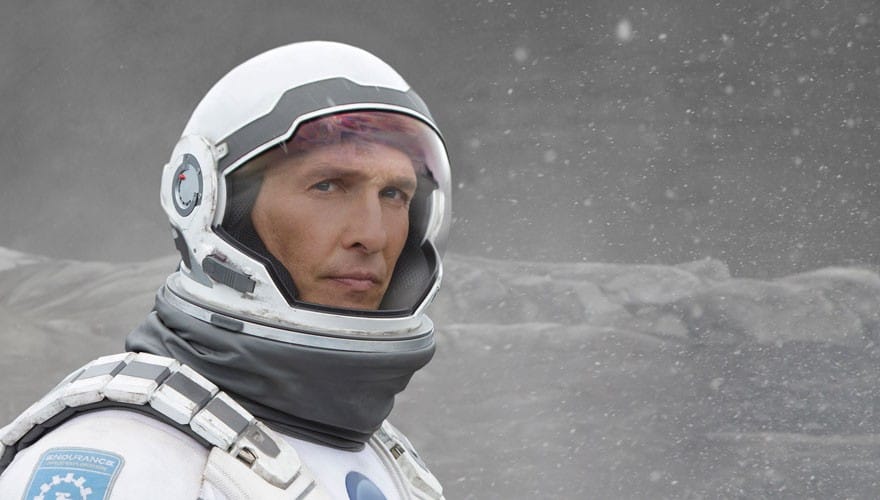 “You might have to decide between seeing your children again and the future of the human race.”

“Once you’re a parent, you’re the ghost of your children’s future.”

“You can’t just think about your family now. You have to think bigger than that.
-I am thinking about my family and millions of other families.”

— Cooper and Doyle
during the mission 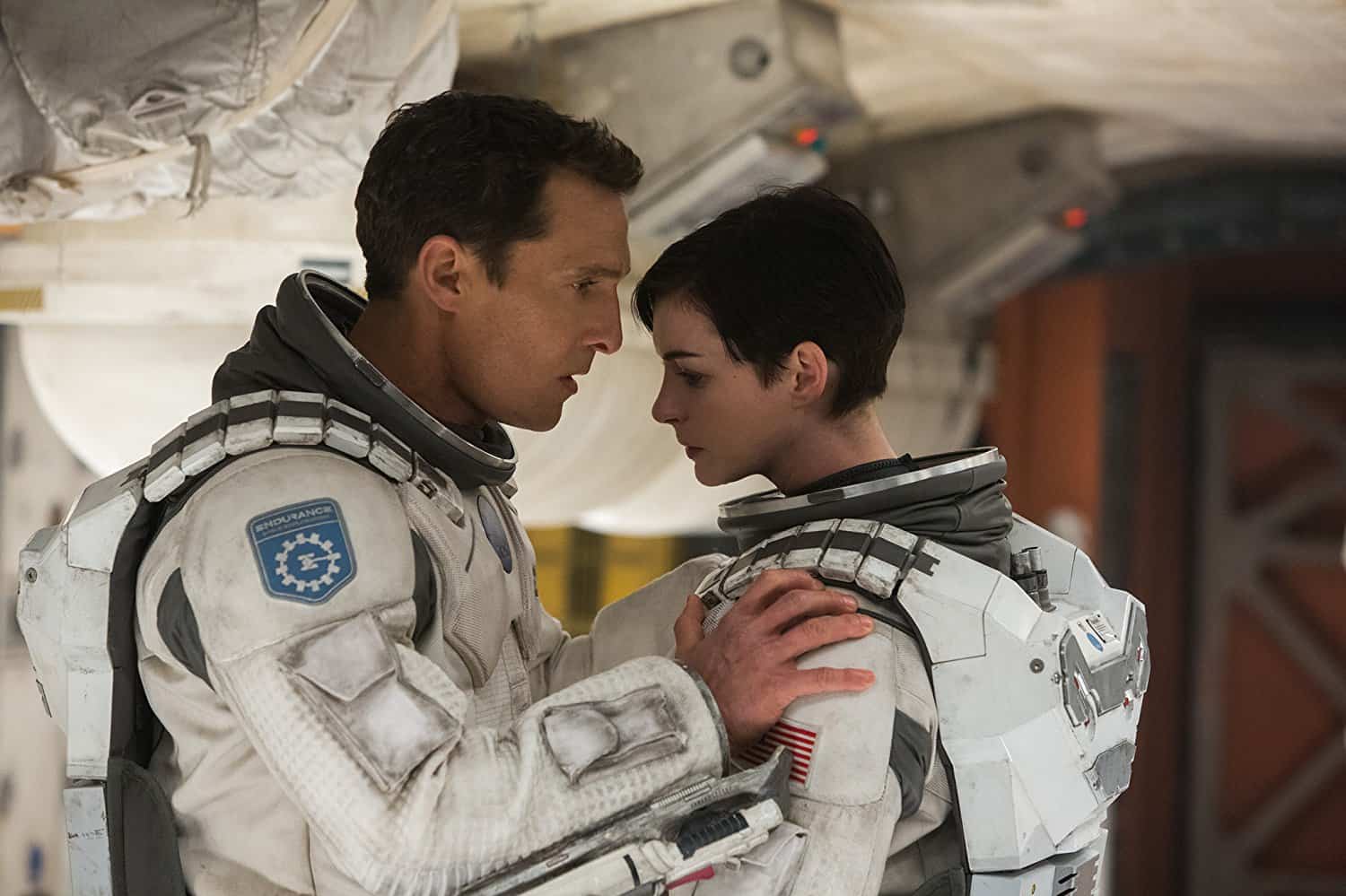 “Maybe we’ve spent too long trying to figure all this out with theory.
So listen to me, when I say that love is not something we invented. It’s observable, powerful. It has to mean something.
Love is the one thing that transcends time and space.”

“Parents are the ghosts of their children’s future.
I can’t be your ghost anymore Murph.”

“I love you forever and I’m coming back.”

“Today is my birthday. And it’s a special one because you once told me that when you came back, we might be the same age.
Well, now I’m the same age that you were when you left…
and it’d be really great if you came back soon.”

“We have attachments. But even without a family, I can promise you that, that yearning to be with other people is powerful. That emotion is the foundation, of what makes us human.”

(“You know why we couldn’t just send machines on these missions, don’t you Cooper? A machine doesn’t improvise well, because you can’t programme the fear of death.”)

(“Take you, for example, A father, with a survival instinct that extends to your kids. What does research tell us, is the last thing you’re gonna see, before you die? Your children. Their faces. At the moment of death, your mind is going to push you a little bit harder, to survive. For them.”)

“Dr Mann there’s a 50/50 chance that your gonna kill yourself!
-Those are the best odds I’ve had in years!”

— Cooper and Dr Mann,
fighting on the Miller Planet

The crew of the Endurance (spacecraft) also featured 2 robots named TARS and CASE, whose lines could not be left without mentioning.

“Everybody good? Plenty of slaves for my robot colony?”

— TARS
after the liftoff and the first rocket stage separation

Getty: They gave him a humor setting, to fit in better with his unit. He thinks it relaxes us.
Cooper: A giant sarcastic robot! What a great idea.
TARS: I have a cue light I can use to show you when I’m joking if you’d like?
Cooper: That might help.
TARS: Yeah, you can use it to find your way back to the ship after I blow you out the airlock.
[cue light flashes]
Cooper: What’s your humor setting TARS?
TARS: 100%.
Cooper: Let’s bring it down to 75, please.

“Cooper, this is no time for caution.”

Cooper: Get ready to match our spin with the retro thrusters.
CASE: It’s not possible.
Cooper: No, it’s necessary.

Cooper: You ready CASE?
CASE: Yep.
Cooper: You don’t say much do you?
CASE: TARS talks plenty for both of us. 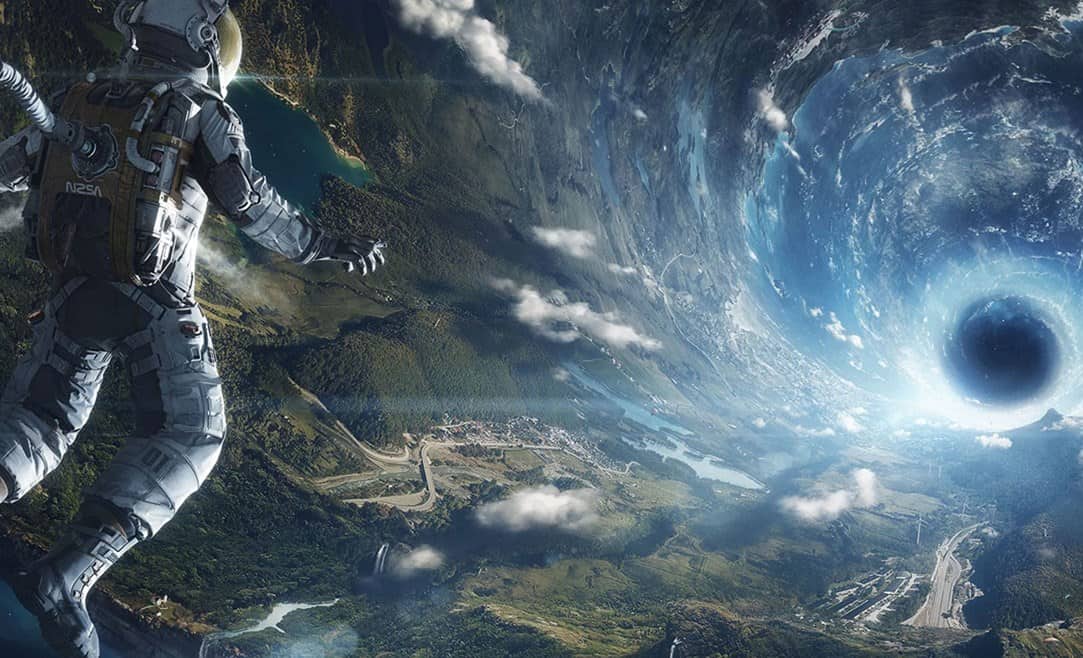 “Brand. She’s out there. Setting up camp. Alone, in a strange galaxy.
Maybe right now, she’s settling in for the long nap.
By the light of our new sun. In our new home.”

That’s it, hope you enjoyed this article and let me know in the comment section if you would like to know more about the wormhole traveling mechanisms (or the relativity of simultaneity concept), so I could make deeper research and add some information on it.