In the 1950s, NASA leadership was in the midst of a debate. They were trying to decide what name was best to call the crew of their spacecraft.

The word ‘Astronaut’ comes from the Greek words ‘Astron’ and ‘Nautes’ which mean ‘sailor among.’ Whereas, cosmonaut with the word ‘cosmos’ suggests exploration not of the stars, but space. As it made more sense, the Soviet Union called Yuri Gagarin, the man who won them the Space Race, a ‘Cosmonaut’ (April 1961). However, NASA to this day prefers ‘Astronaut.’

Astronauts are trained around the world in many different locations. These include the United States, Europe, Russia, and Asia. However, unlike other careers, they do not always accept recruits.

In the United States, NASA makes announcements that applicants are wanted on an as needed. The European Space Agency hasn’t been open to astronaut selection since 1992 and, even then, applications were accepted for just months. On the rare occasion that a position opens up, the competition is quite intense.

Over the years, NASA has had an upward trend in interest. It set a record in 2016 with over 18,000 people submitting applications. Only 120 people are invited to an interview and, of these, just half are welcomed back. For those in Europe, the chances of becoming selected for training are also very slim. During the last recruitment in 2009, only six were picked out of 8,413.

How to be an Astronaut – NASA Requirements

When new astronauts are needed, candidates must have vast knowledge and experience to meet and preferably exceed training program admittance guidelines. No matter where they are, those who apply must be exceptionally strong in several key areas. These typically include a high-level education, flying experience, and proof of physical and mental ability. 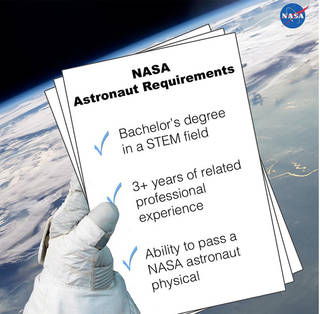 As an example, to qualify to train with NASA, candidates must first complete an undergraduate program and earn their bachelor s degree. And not just any major will be accepted. While there are no schools or university tracks specific to the field, there are other ways to learn relevant skills. You will need to focus your studies in engineering, mathematics, or the physical, biological, or computer sciences.
In addition to this, candidates must also have three years or more of related experience or 1,000 hours commanding a jet aircraft.
The third and last NASA requirement is passing a long-duration physical examination, which has many different parts.

Among other things, astronaut candidates must also have skills in leadership, teamwork and communications, as well as there, are some blood pressure limitations and specifications for just how tall or short you can be. That’s right; if you’re not the right size, you may be disqualified as you won’t fit inside of a spacesuit. In addition to this, for obvious reasons, you will need to be able to see well with 20/20 vision in each eye, either naturally, with surgery, or with lenses.

How to Be an Astronaut – European Space Agency (ESA) Requirements

Similar to NASA, the European Space Agency requires a high standard of education in technical or scientific disciplines. While not essential, aircraft experience is also highly recommended. Physical condition is taken into consideration, and they list additional mental abilities that prospective astronauts must have to succeed. These include the ability to cope with high-stress situations, get along with others, and, in general, be adaptable.

Why are these necessary?

Well, spaceflights may last for months. Those in the spacecraft will be crammed all together with the same people every day. Getting along will be imperative to tackle unforeseen situations as they come successfully. It will also be necessary to work well as a team and to complete a given mission.

In addition to all this, the Russian research and test cosmonaut training center claim that the concepts of motivation and trainability are also crucial for the recruits. With the amount of training they will be required to complete, candidates must be willing to stick it through and work hard to master new things.

So, say you have the education, experience, and physical and mental ability to get accepted to an astronaut training program. This is when the challenge really begins. Training will be neither quick or easy and requires years of dedication. During this time, trainees will learn what to expect before, during, and after they launch into space. 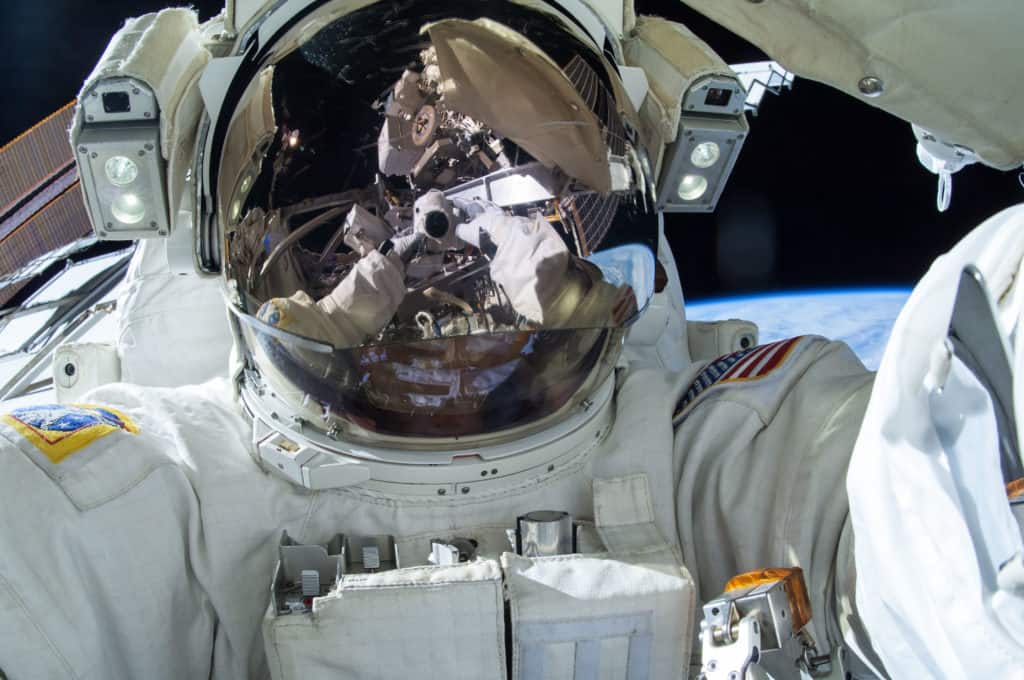 What Does it Feel Like to Take off and Land?

Just the act of taking off and landing can be quite brutal and incapacitate people for days. In fact, some 60-80% of those who travel to space, experience space motion sickness for the first 2 or 3 days after leaving, and may experience it again for another 2 or 3 days once they return. This may either be caused by shifts in the fluid surrounding the brain or because of the effects of gravity on the inner ear. Whatever the cause, it makes those who have it feel overly hot, sick to their stomach and exhausted. Those who do throw up often have a little warning, but it typically doesn’t last very long. Almost a whole crew getting motion sickness is so common that on most space missions activities are limited for the first few days.

The use of proper training, as well as medications, have been somewhat successful at preventing this level of sickness. However, medications must be used with caution, as they can also cause drowsiness or impair concentration. For those on a spaceship, this could be a lethal combination.

Another effect of spending time in space detects a fair number of heartbeat irregularities (enough to raise the question whether zero gravity increase tendencies for heart rhythm irregularities, which could lead to potentially fatal heart conditions).

Sometimes, after a mission is over, blood pressure may start to drop as a person tries. This will make them feel dizzy, and they may even pass out. This is common for a few days and should resolve by itself.

It is also worth noting that prolonged exposure in space can cause other problems as well. In the space environment, the heart’s shape becomes rounder, and some of its muscle mass is lost. Scientists hope to discover an exercise routine that could help keep hearts strong to counteract this.

Of course, in addition to what happens at takeoff and landing, astronauts must also know what to do as they orbit in space. For this purpose, they will be taught the concepts behind orbits and astronomy. 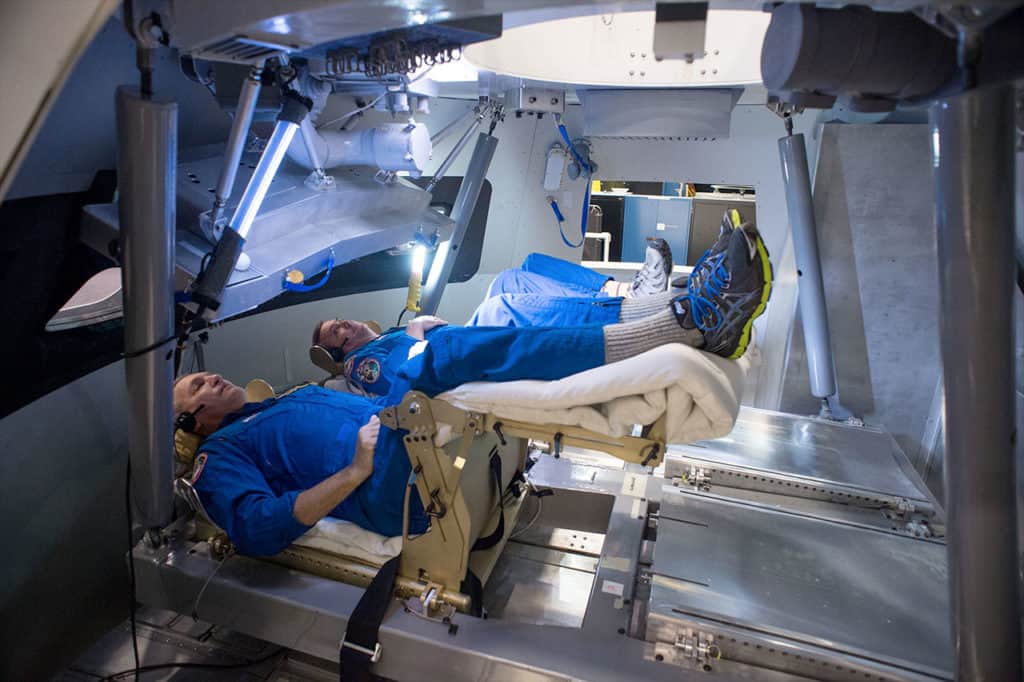 Astronauts are also given access to a realistic spacecraft model so they can learn how their different components function. They will learn things such as how the rocket engine propels the craft, and how insulation regulates equipment temperature. And of course, very critically, about how the systems work that provide them with the basic necessities such as food, water, and air. More than knowing how all of these work, an astronaut must also be able to respond effectively to their failure.

Further, he or she must know how to protect them during a disaster as well. 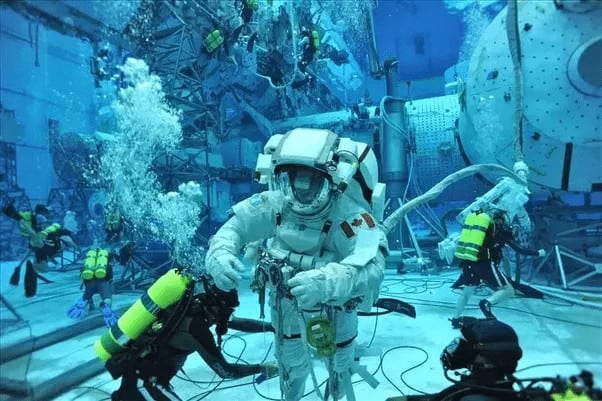 Of course, astronauts must also prepare for their part of the spaceflight’s mission. This often requires such things as learning how to navigate through space successfully while wearing a spacesuit. To simulate this here on earth, astronauts put on their equipment and submerge themselves in water. They then walk around and perform various tasks while entirely underwater.

Other useful skills astronauts should know for a mission include learning how to pilot the ship and accurately determine its position. To do this, they must also know how to identify potentially confusing optical illusions.

In addition to understanding the internal workings of a spaceship and how to perform their jobs, astronauts must also prepare themselves for the psychological challenges of the space environment. As many who have been to space have said:

“Dealing with the combination of constant danger, loneliness, and limitations
was the most challenging thing they ever did.
In space, danger never ends and may always be near.”

Experts have described that by living in a situation surrounded by danger, it makes one hyper-aware of it.

There is also something comforting about feeling attached to the ground that is absent when drifting in space. Over time the sensation of floating, while exciting at first, may become much less fun. If nothing else, it can be frustrating and make some of the simplest tasks a challenge.

An astronaut’s sense of balance may be thrown off by the distortion of time as well. Instead of happening once every day, in space, sunset and sunrise switch back and forth every 45 minutes.

On long shifts over lengthy missions, one may lose complete sense of how much time has passed or what time it even is. However, the most profound sense of loss many astronauts have felt is the missing connection to their normal life. Astronauts expressed this even after weekly interactions with their families and friends which not every astronaut has.

Another thing that some had considered one of the very worst feelings was when they were sitting around with nothing to do and without any type of distraction. Then, to this sense of uselessness or boredom, you must add a stifling lack of freedom. The good news is that astronauts are well prepared for these types of situations. They know what to expect through practice and have developed different coping mechanisms. To show they can handle being by themselves astronauts have been kept in isolation chambers. They have also been locked up with others for over a month to learn about compromise and limited freedoms.

We have all seen the videos of astronauts laughing and doing flips as they float around freely on their ship. But now we’ve learned that the magical feeling of weightlessness can become much less fun. Many people want to become an astronaut, and thousands upon thousands go so far as to apply. However, the job is not an easy one and requires a lot of grit and sacrifice.

Ultimately, just for fun, here’s an example of a reply from the National Aeronautics and Space Administration as per his application for an astronaut:) 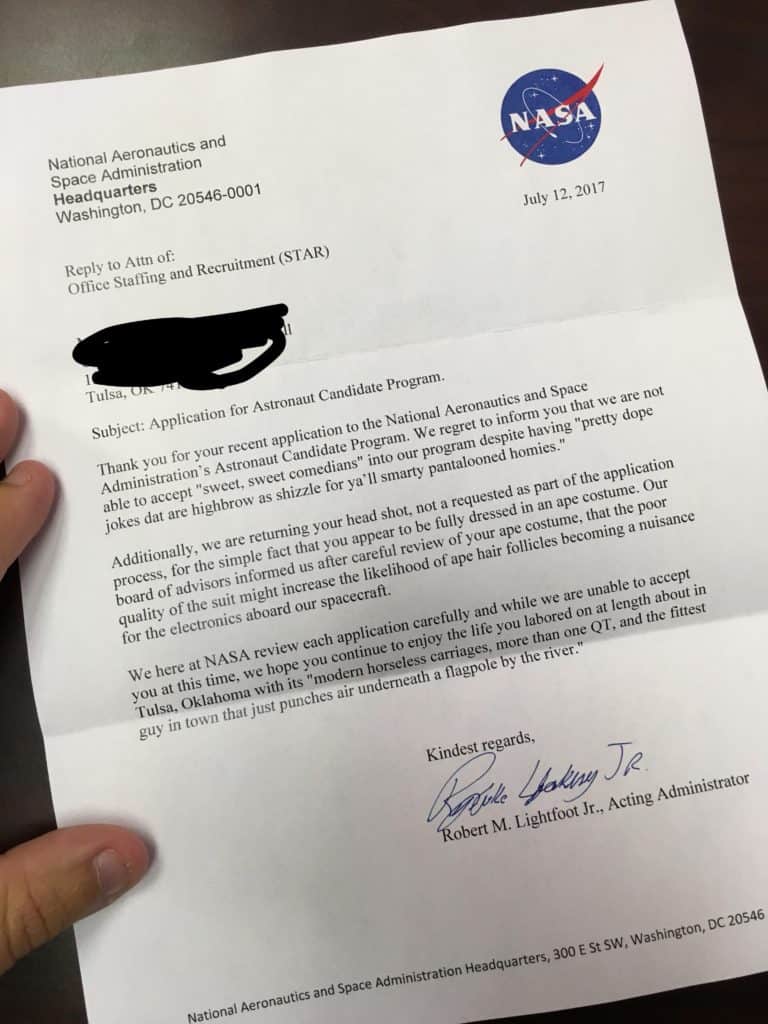 Check out the video below to find out if you have what it takes to become an astronaut!

2 thoughts on “How to Become an Astronaut”