Obi-Wan Kenobi (later known as Ben Kenobi) is undoubtedly one of the most legendary Jedi knights of the Star Wars franchise. He is known for being a Jedi mentor and a friend to Anakin Skywalker in the prequel trilogy, who, upon turning to the Dark Side, has been named Darth Vader (near the end of the Clan Wars).

Besides being a Jedi mentor, Kenobi played a vital role, serving as a general in the Republic Army (during the Clone Wars) and having defeated the mighty General Grievous in a fair battle.

General Grievous: General Kenobi! You are a bold one… Kill him!

☝ Funny fact: The quote “Hello there, General Kenobi” have now become iconic and used by many people during any kind of unexpected appearances and to highlight the momentousness of the meeting.

Being featured as the main character in various Star Wars media, Obi-Wan can be fairly called the most influential Jedi ever lived in the Star Wars universe. He was the first Jedi in 1000 years to defeat a Sith Lord named Darth Maul, who had killed Kenobi’s mentor – Qui-Gon Jinn during the Battle of Naboo.

Obi-Wan Kenobi was born on the planet Stewjon, 57 years before the Battle of Yavin. Due to his abilities in the Force, he has been taken to the Jedi Temple on Coruscant within 6 months of his birth and began his training.

Being a youngling, Obi-Wan was tutored by the Grand Master Yoda, before he became a Padawan learner and a headstrong apprentice to a Jedi Master Qui-Gon Jinn. 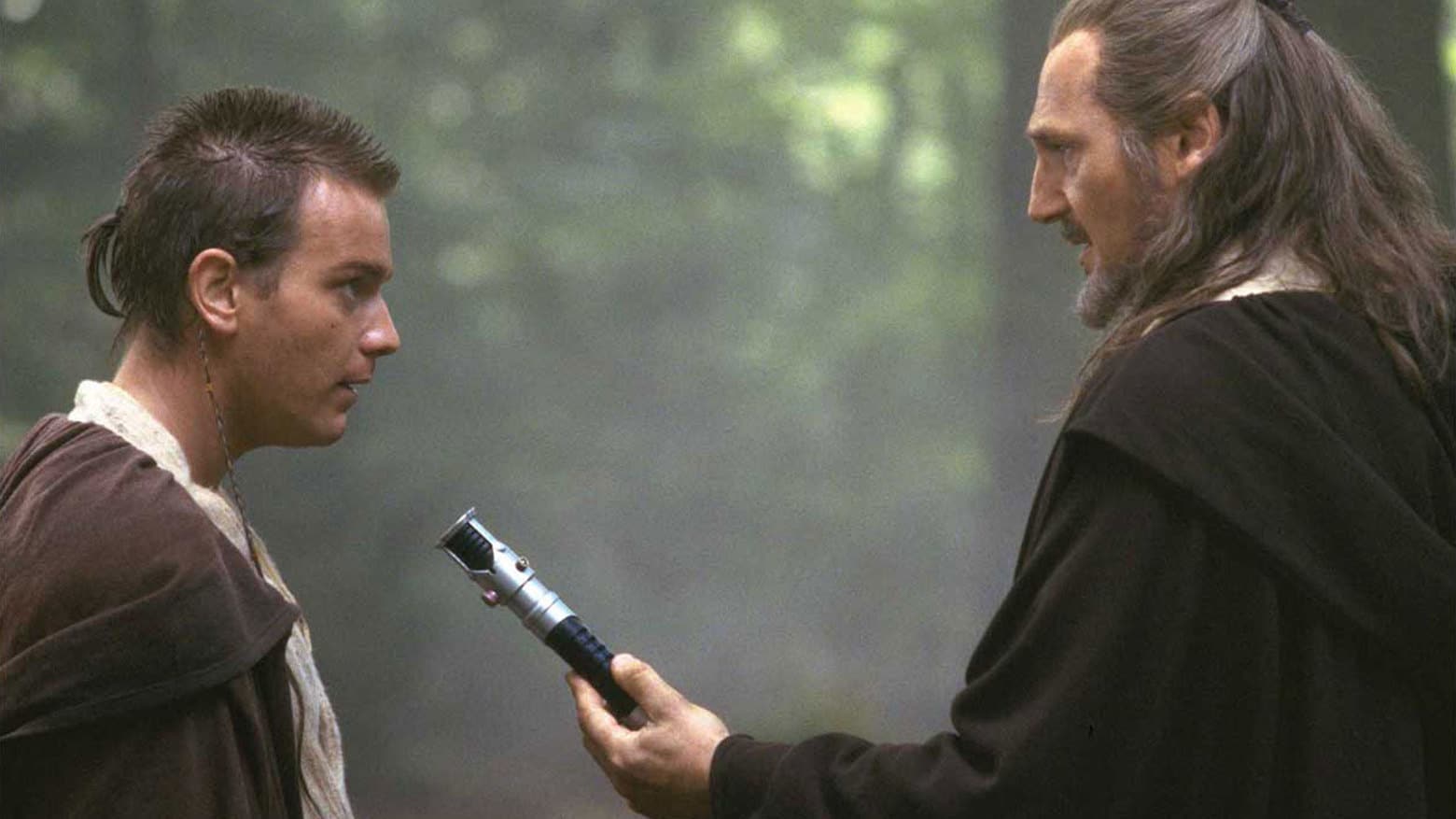 Obi-Wan and Qui-Gon have forged a very strong bond, though Kenobi was a more faithful follower of the Jedi Code than his Master, who preferred to follow the will of the living Force and his conscience.

During the Clone Wars, Kenobi and Jinn were dispatched to negotiate the dispute between the Trade Federation and the planet Naboo, but the negotiations never took place. The Sith Lord, Darth Sidious, has ordered to set a trap and kill the two. Obi Wan and his Master were made to retreat to the planet’s surface, where they met Queen Padmé Amidala of the Naboo. Escorted by two such powerful Jedi, she decided to go back to Naboo and retake the planet. Little did they know that the Emperor Palpatine’s deadly weapon, a skilled lightsaber duelist and assassin, Darth Maul, has already been waiting for their arrival.

During the Battle of Naboo, Maul has fatally wounded and killed Qui-Gon, but the young Padawan has taken his revenge by defeating him… with his Master’s lightsaber. (See video above)

The Jinn’s last wish was that Kenobi take Anakin Skywalker to train as a Jedi and this promise has been fulfilled. Obi-Wan has been granted knighthood by the Council, and Anakin was named his Padawan. The following quote shows how strong the bond between these two was:

“The road lies before you, Anakin Skywalker.
Will you walk it alone?”
“No, Master. As a Jedi. If you’ll show me the way.”

In the course of the Clone Wars, Skywalker has become a Jedi Knight while Kenobi was honored the title of Master and joined the Jedi Council. The two Jedi fought side-by-side as generals many times. 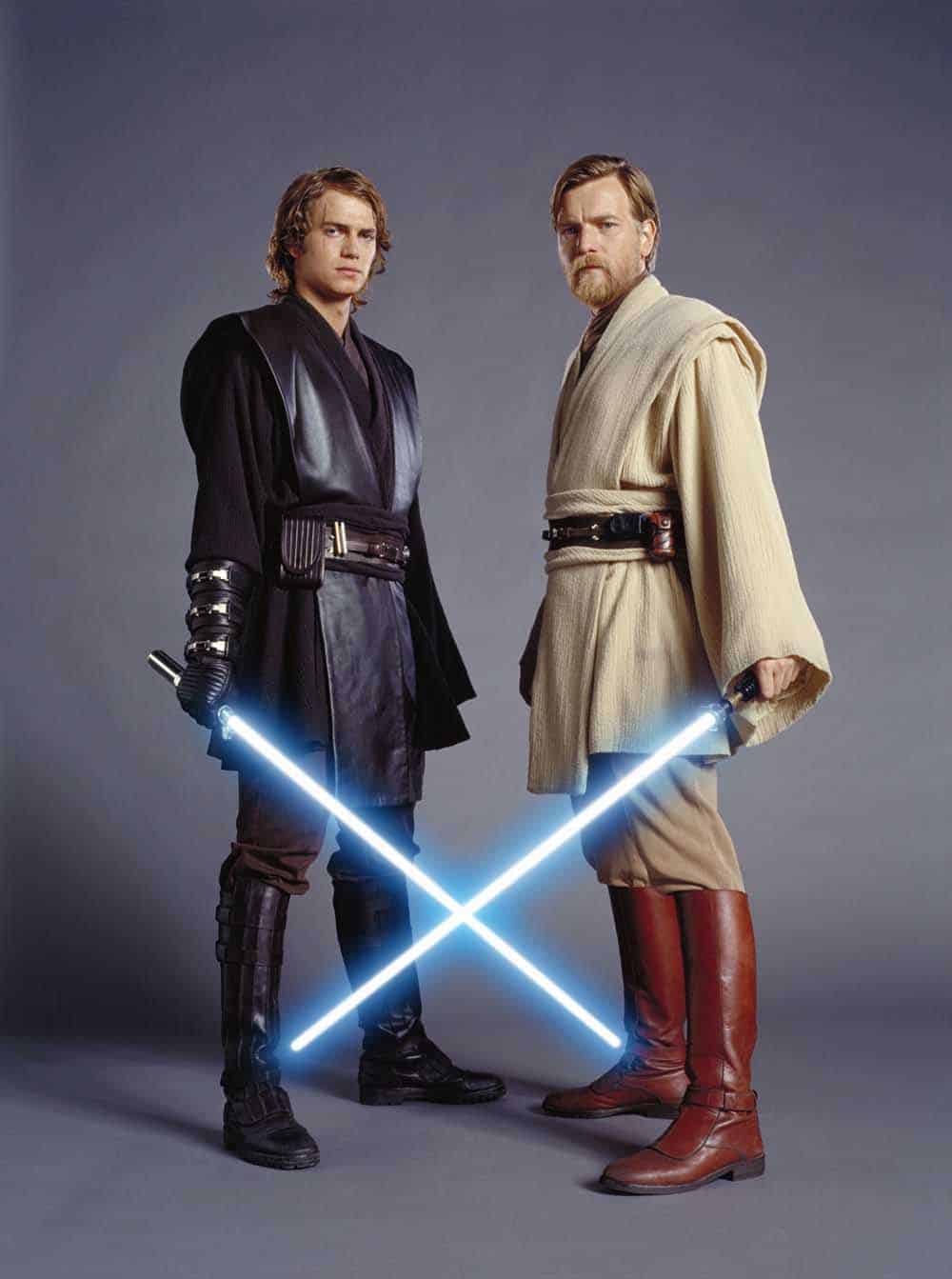 In the last days of the Clone Wars, Anakin has turned to the Dark Side, betraying and destroying the Jedi Order by the command of his new Sith Master, Supreme Chancellor Palpatine. Obi-Wan has managed to survive and reunite with another survivor – Grand Master Yoda.

“For over a thousand generations, the Jedi Knights were the guardians of peace and justice in the Old Republic.
Before the dark times, before the Empire.”

Kenobi encountered Skywalker (now named Darth Vader) on the planet Mustafar where an epic clash between the Master and his Padawan has begun. Despite Obi-Wan’s pleading, Anakin fought fiercely and was filled with anger and hatred (under the influence of the Sith Lord, Darth Sidious). 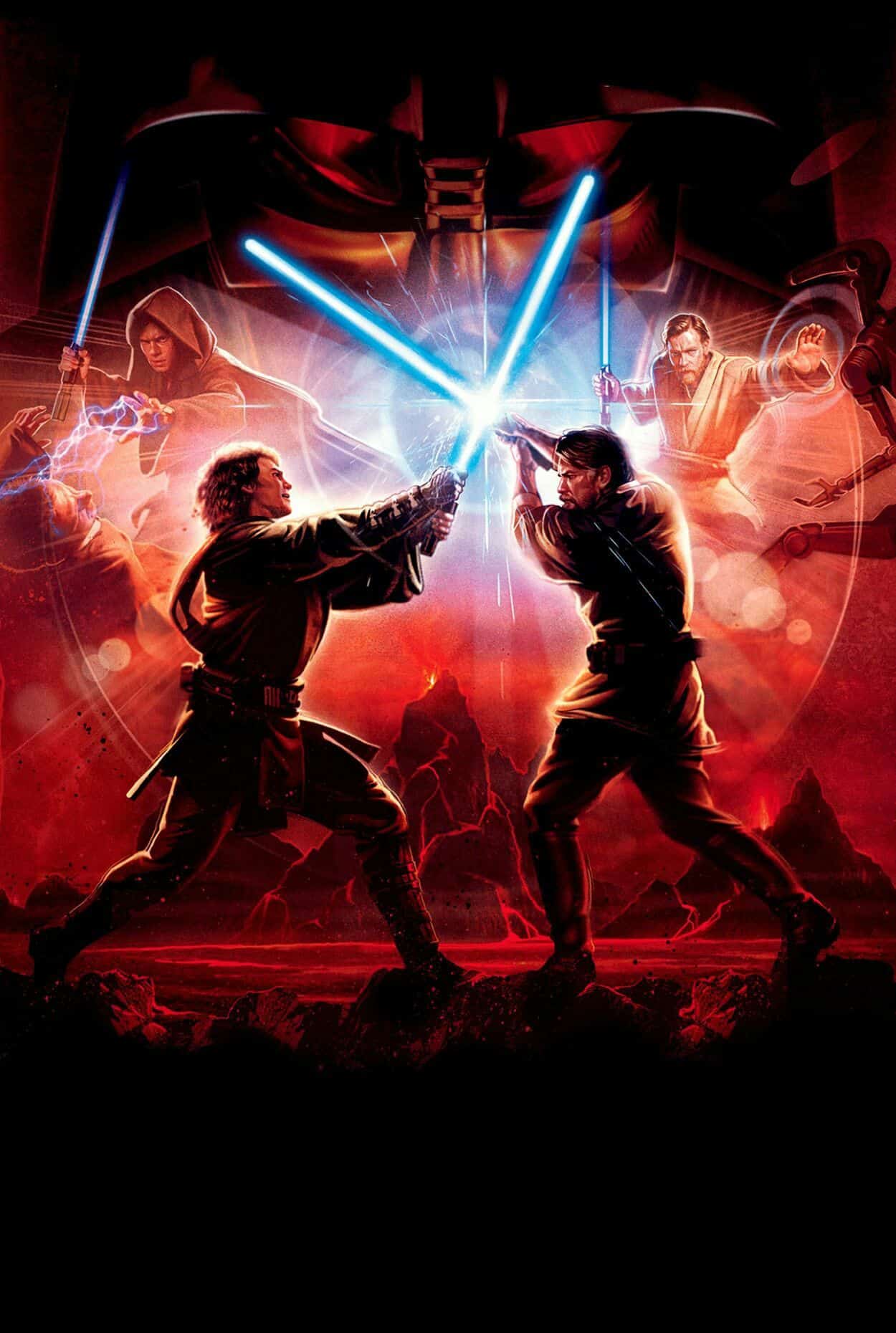 “You were the Chosen One! It was said that you would destroy the Sith, not join them!
Bring balance to the Force, not leave it in darkness!
You were my brother, Anakin! I loved you!”

Kenobi has won the duel by deadly wounding Vader and remorsefully leaving him for dead in the lava streams, but he was later found by Chancellor Palpatine, who by that time had established the Galactic Empire in place of the Galactic Republic. And so, Darth Vader was rehabilitated but fully reliant on his cybernetic suit for life support.

Obi-Wan has taken it upon himself to stop Vader, but he couldn’t bring himself to kill the man he considered a brother. Instead, he took Anakin’s newborn son, Luke Skywalker, and went into exile on the Tatooine planet to protect him as promised. The next quote demonstrates the good intentions of the two:

“And what of the boy?”
“To Tatooine. To his family, send him.”
“I will take the child and watch over him.”

The Dark Times (From Obi-Wan to Ben)

After the formation of the Galactic Empire, Obi-Wan Kenobi continued hiding in the desert planet Tatooine. He changed his name from Obi-Wan to Ben and spent his years as a hermit. 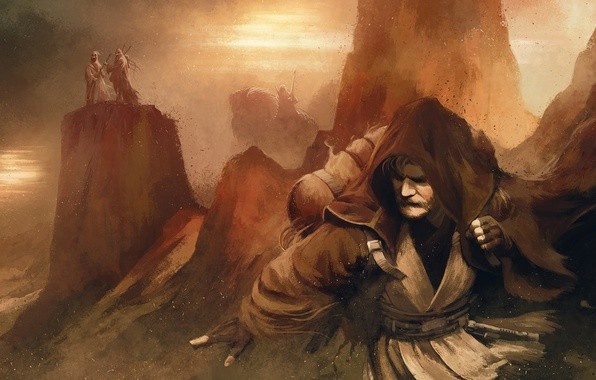 The right time came when Luke Skywalker was 19 years old, and Obi Wan informed him of his Jedi heritage. Young Skywalker has become Kenobi’s Padawan, and together they have found a crew, headed by an experienced pilot, Han Solo, who took them to a moon-sized Imperial military battle station, Death Star, on his Millennium Falcon spaceship.

Death on the Death Star

While on the Death Star, the members of the Millennium Falcon crew (Obi-Wan, Luke, Han Solo, Chewbacca, C-3PO and R2-D2) were on a mission to rescue Princess Leia Organa. Having succeeded in releasing her, the crew hurried to leave the battle station.

Obi-Wan took it upon himself to deactivate the tractor beam that was holding their spaceship. The Jedi Master was successful, but then encountered Darth Vader, his former student turned Sith, and the two engaged in one final battle… 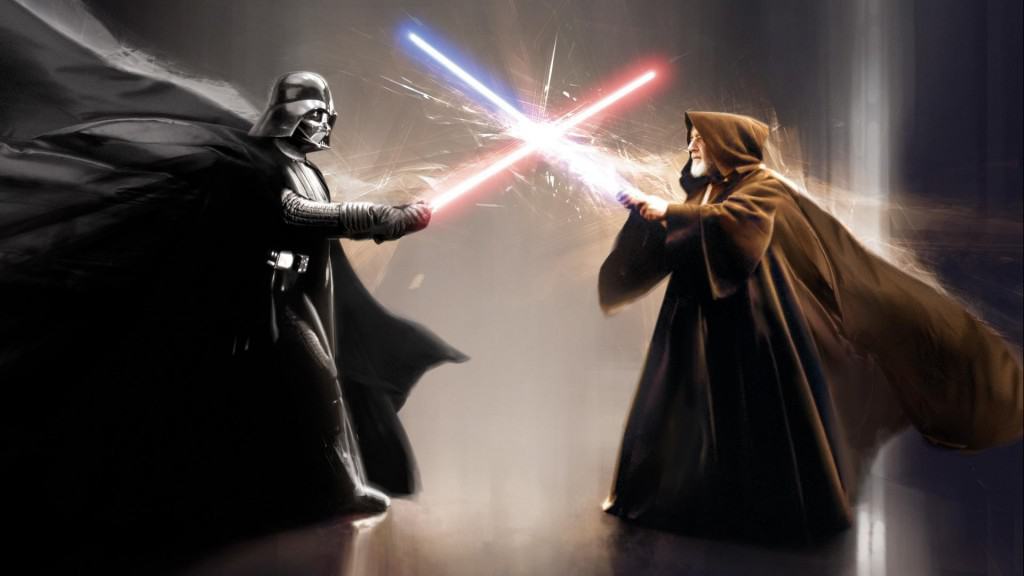 “You can’t win, Darth. If you strike me down, I shall become more powerful than you can possibly imagine.”

As soon as Obi-Wan saw the young Skywalker boarding the ship, he gave Vader a mysteriously known smile and took a deep breath with his eyes closed. Without any hesitation, Darth Vader has struck Obi Wan Kenobi down, and his body disappeared, becoming the One with the Force.

Most Famous Quotes by Obi-Wan Kenobi 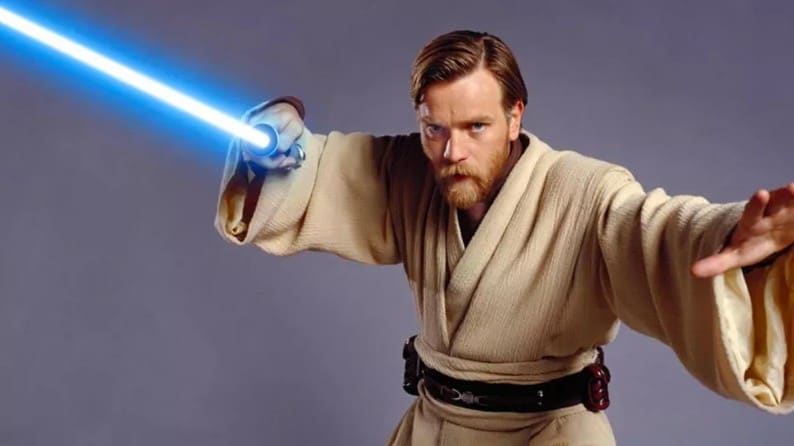 “The force is what gives a Jedi his power. It’s an energy field created by all living things. It surrounds us and penetrates us. It binds the Galaxy together.”

― Explaining the basics of the Force to Luke

“These aren’t the droids you’re looking for.”

“Skill is the child of patience.”

“You’ve taken your first step into a larger world.”

― Training Luke Skywalker to use the Force 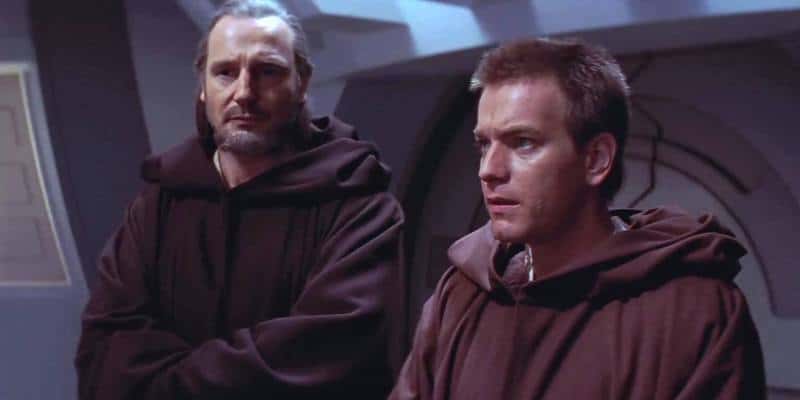 “If you define yourself by the power to take life, the desire to dominate, to possess…
then you have nothing.”

“Who is more foolish? The fool or the fool who follows him?”

“If his ship is as fast as his boasting, we ought to do well.”

― Regarding Han Solo
and the Millennium Falcon. 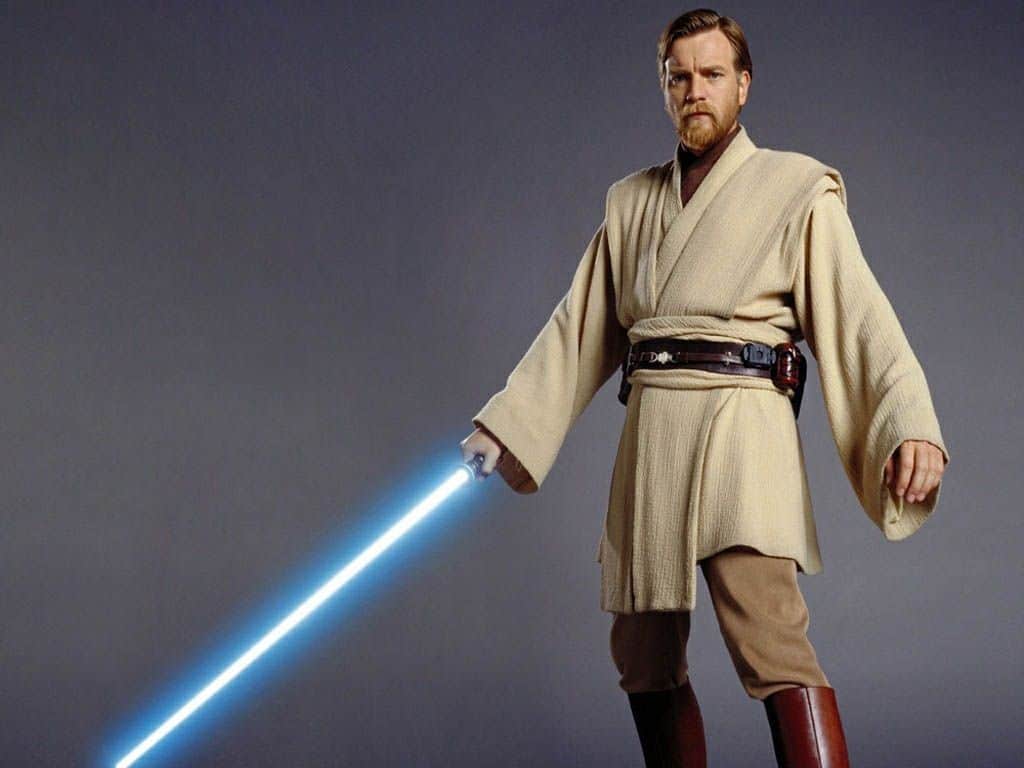 “It is an energy field and something more.
An aura that at once controls and obeys.
It is a nothingness that can accomplish miracles.”

― Obi-Wan about the Force

“Only a Sith deals in absolutes.”

― Referring to a blaster after shooting General Grievous 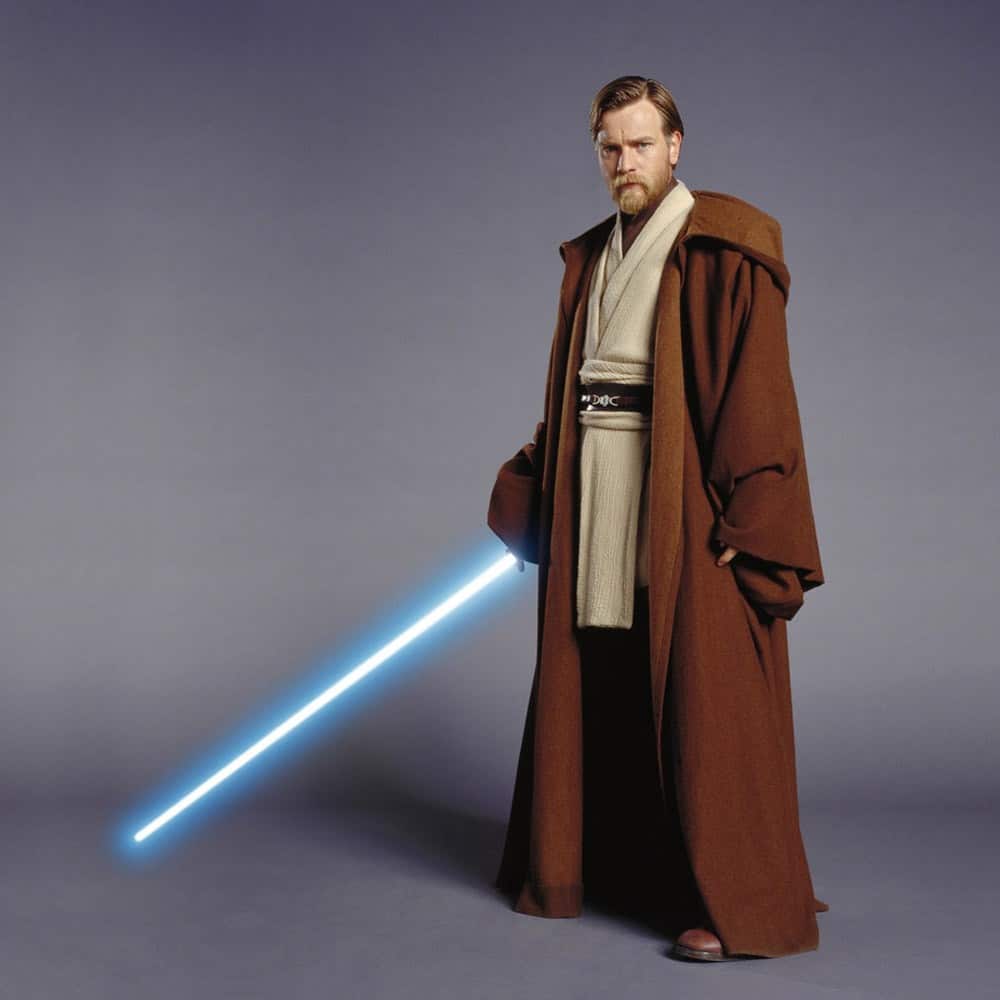 “Remember… the Force will be with you. Always.”

― To Anakin Skywalker,
during their fight on Mustafar

“I am stronger as part of the Jedi Order than I could ever be alone.”

“Be mindful of your thoughts, Anakin, they betray you.”

Episode III – Revenge Of The Sith

― The final exchange of Luke Skywalker and Obi-Wan Kenobi 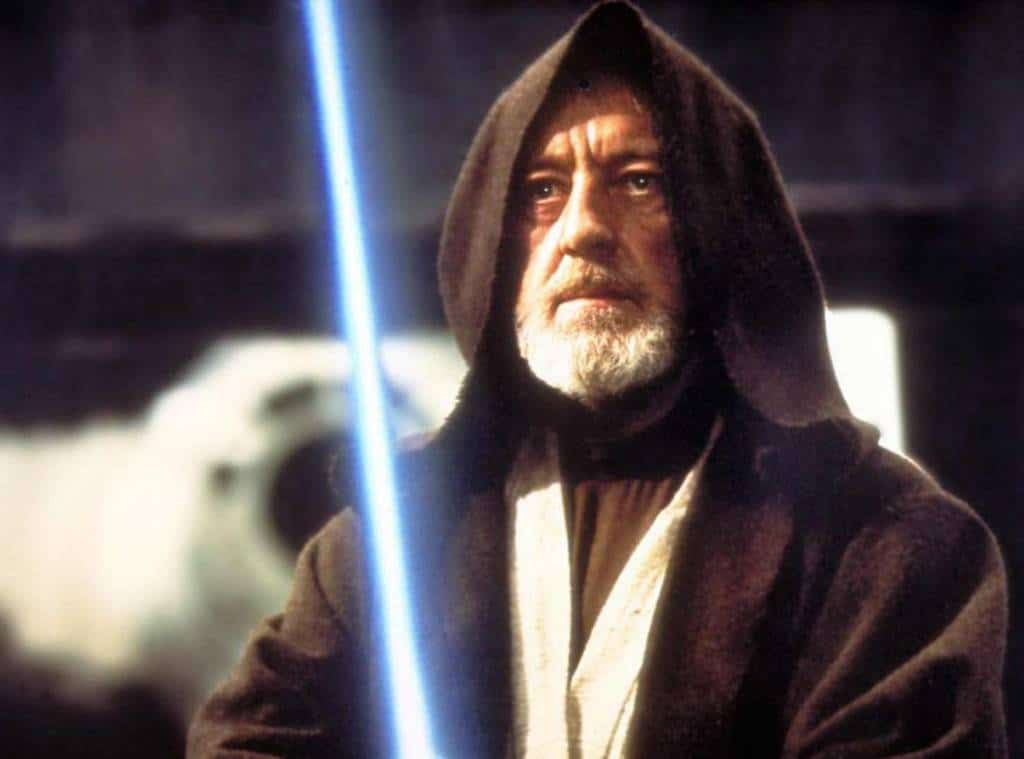 “If you strike me down, I shall become more powerful than you can possibly imagine.”

“I will never join you, Dooku. It may be difficult to secure your release.”

“I have successfully made contact with the Prime Minister of Kamino. They are using a bounty hunter named Jango Fett to create a clone army.”

After the destruction of the Rishi Moon tracking station, Kenobi and Skywalker intercepted a coded message between Ventress and Grievous and led clone warriors in defense of Tipoca City.

In Star Wars: Episode III – Revenge of the Sith, Obi-Wan – played by Ewan McGregor – greets the audience by saying “hey there.”

The Jedi battled back against the overwhelming droid army, but only a few Jedi survived, and they were surrounded by battle droids in the center of the arena