Weekends and holidays are perfect for family gathering and spending quality time chatting with our parents and kids. But there are those inevitable times when â€œgrown-up talksâ€ occur, and children find them boring, of course, so they disconnect and dive into their tabletsâ€¦

IS THERE AN ALTERNATIVE?

Launch the imagination of your child with â€˜LEGO Cityâ€™ construction sets by LEGOÂ®. If your little dreamer loves space and wants to explore new places, heâ€™s going to appreciate such a combination of creative development and having fun! No other building toy goes into such detail and interactivity as LEGO. These are not only toys but learning tools that activate the minds of our little ones. Itâ€™s also a very good inspiration for kids to learn about real space science. Itâ€™s always fun to assemble and has a great deal of playability after itâ€™s built.

“The desire to create is one of the deepest yearnings of the human soul.”

One of the best features of LEGO construction sets is that the pieces (bricks) are packaged into separate bags â€“ each package is numbered and has its own instruction manual for assembling that specific section, which makes the building process very clear for the kids.

Another thing that makes LEGO construction set a great gift, is that it can be built together with all other original LEGO toys and bricks for more creative play. We all know how good the quality of the sets from this brand, so that goes without saying.

Finally, give your little ones an amazing building experience with the â€˜LEGO Lifeâ€™ App for smartphones and tablets. They can join a fast-growing community and share their builds with other LEGO fans. Itâ€™s a very easy-to-use application that allows to zoom, rotate and visualize the build. There is also a very useful instructions guide for the younger builders, that leads them through the building process for a greater sense of independence and achievement. The â€˜LEGO Lifeâ€™ App is available on:

One more thing I should mention is that space-related line of LEGO playsets is right on the button at this point, since this year is the 50th Anniversary of the historical Moon landings by NASAâ€™s Apollo 11 (July 1969) and Apollo 12 (Nov 1969).

So, with no further ado, find below a selection of the best construction sets by LEGOÂ® found on the Amazon, categorized by the age recommendations of the manufacturer.

WARNING!
CHOKING HAZARD: The following toy sets contain small parts or balls. Not suitable for children under 3 years or any individuals who have a tendency to place inedible objects in their mouths. 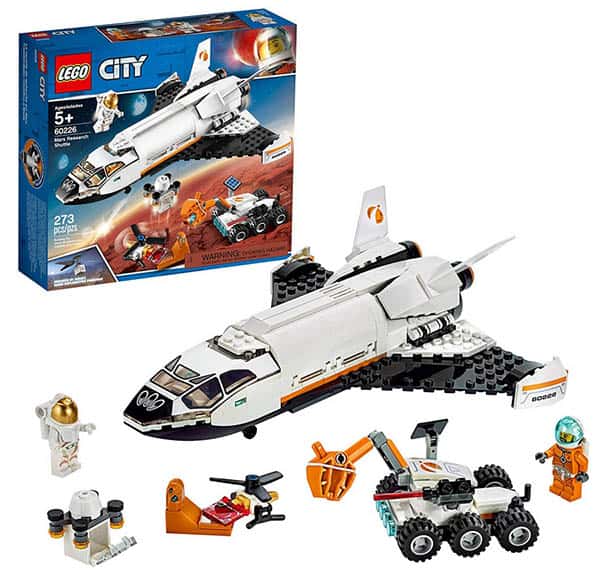 Buckle up and blast off to discover the mysteries of the Red Planet with this awesome Mars Research Space Shuttle Crew by LEGO.

Explore the surface of Mars to obtain valuable resources and specimens in the company of 2 astronauts, 2 drones and a Mars rover (that was based on the NASAâ€™s â€˜Curiosityâ€™ rover and able to retrieve geodes with an articulated grappling arm).

Your little space explorer is going to be excited to assemble this LEGO set and launch his own research mission to Mars! 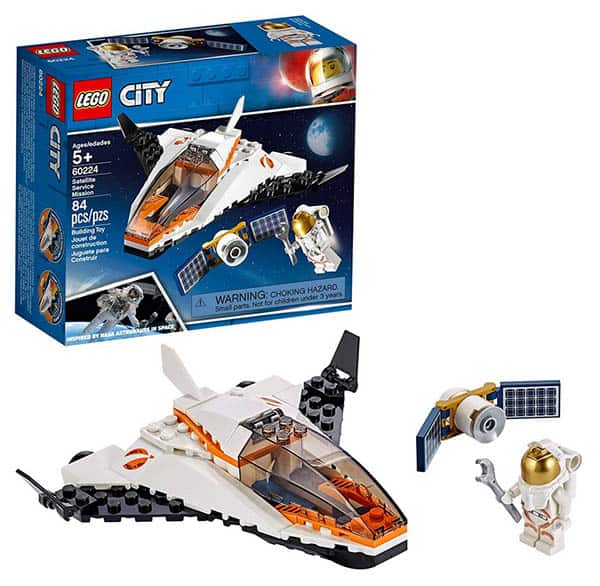 This particular toy set is small, but contains everything needed to let your little space explorer blast off into the orbit of the Earth, and perform a specialized satellite service mission.

This is a one-man mission to launch a satellite into the orbit of our planet and restore the uplink communication system with Ground Control.

Gear up and prepare to accomplish the mission for the sake of all mankind, Commander! 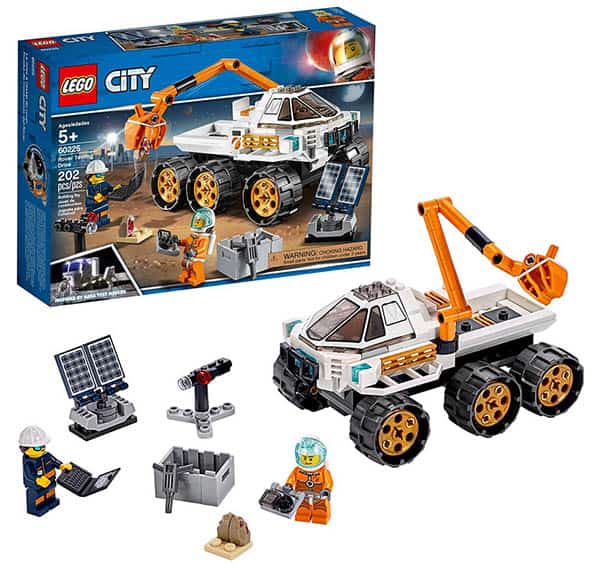 Prepare yourself for an important space mission with this construction set by LEGOÂ®. It contains a sturdy Mars rover, removable solar power generator and fully-equipped crew of an astronaut and an engineer, ready to perform surface exploration and sample research.

Launch the imagination of your child, and recover geodes with an articulated grappling arm of the rover on the surface of the Red planet!

Just like any other LEGO set, this one comes with a clear and precisely illustrated instructions to help your little space engineer accomplish the mission. 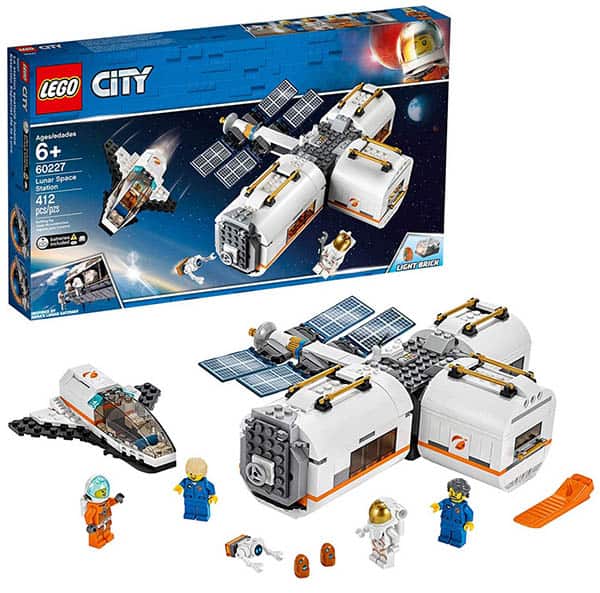 Your crew have successfully landed on the Moon surface to explore the planet and obtain samples of possible lifeforms.

The mission objective is to team-up with a crew of 4 astronauts and set up a lunar space station for continuous observation and research.

Inspired by NASAâ€™s space missions, this realistic toy set includes 3 station modules, detachable space shuttle and a robot to help your little commander safely explore the surface of the Moon and complete the mission.

Your little Launch Director is going to be excited to perform a realistic rocket blast-off and operate a space rover (and a robot) to retrieve valuable materials from unknown planets.

Lots of creative play and interactive experience with this SPACEtacular toy set! Ready to blast off? 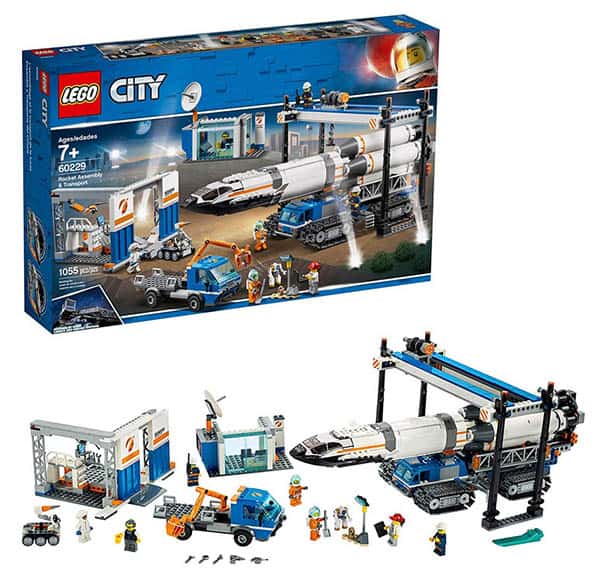 Rocket Assembly and Transport is another excellent construction set by LEGOÂ®, which was designed to fulfil the dreams of your little space engineer. It includes more than 1000 bricks and lots of options for your imagination.

Let your kid assemble a realistic spacecraft and blast off into space with a crew of 2 brave astronauts, 2 scientists and 2 engineers. Detachable rocket cockpit can turn into a separate space shuttle for any short-distance expeditions.

Amazing imaginative play and construction opportunities for your child! 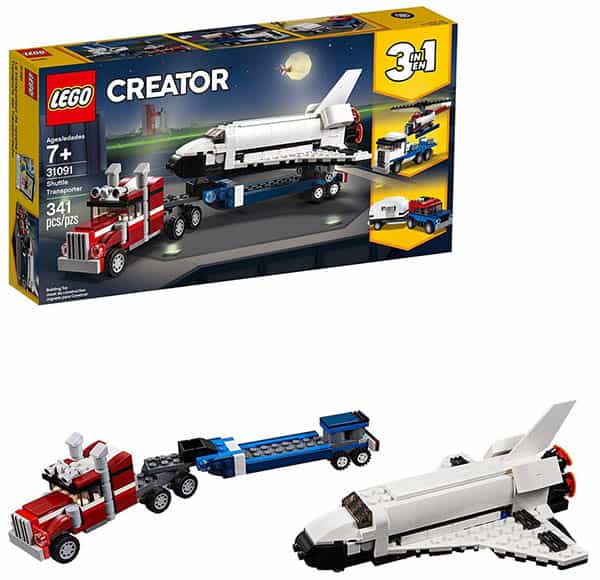 This playset comes from the â€˜LEGOÂ® Creatorâ€™ line, which means that there are more options to assemble it. There are 3! Launch the creativity of your child with this construction set by LEGOÂ®, that can be assembled in 3 different ways: space shuttle transporter, helicopter transporter and car with a caravan. This is a good combination of creative thinking development and playing at the same time! 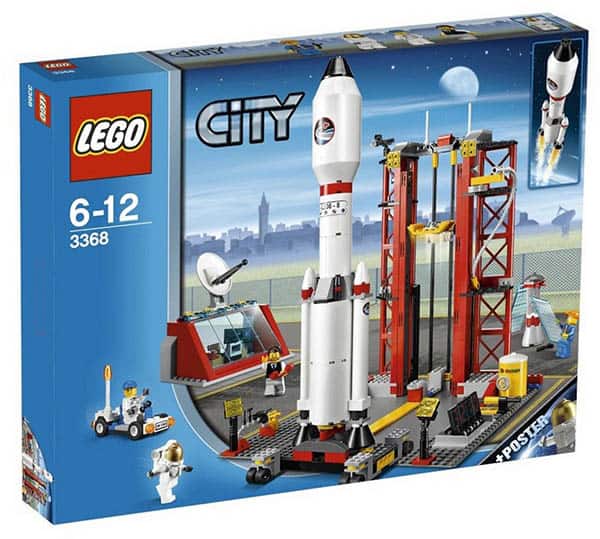 A detailed toy set from the â€˜LEGOÂ® Cityâ€™ line opens new role-play possibilities for your little space dreamer: prepare the astronaut for launch; fuel the rocket; adjust the engines; get mission control ready; load the pilot into the cockpit with an elevator and start the countdown for sending your crew into outer space!

With the crew of two astronauts, an operator, and a mechanic, perform your very own rocket spaceship launch.

Start the countdown and get ready for an awesome imaginative space adventure! 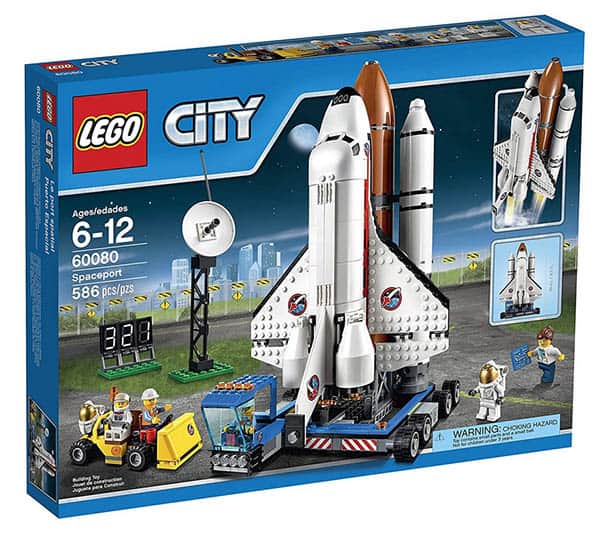 This construction set will spark an interest of your child to launch a realistic space shuttle into the outer space.

Operate a crew of 5 members to accomplish the mission in the orbit of the Earth. Prepare the launch site for the liftoff, fill up the detachable external fuel tank and prepare the rocket boosters. Commence the countdown for the blastoff when ready.

To complete the mission, deliver the astronauts to the orbit and open the cargo bay doors to launch the satellite.

This detailed play set with lots of assorted accessories will launch the imagination of your child beyond the orbit of our home planet. 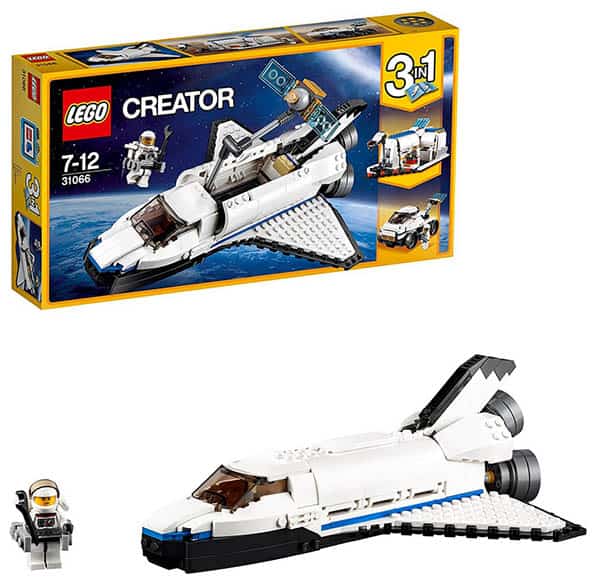 This is a 3-in-1 construction set from the â€˜LEGOÂ® Creatorâ€™ line, which means that your kids can stretch their imaginations to the outer limits. Among the possible options, you can build: a space shuttle (with an opening payload bay), a Moon station (with a robotic arm) or a Space Rover (with a drilling arm). Keep the fun going with different builds and compatibility with the other original LEGO sets. And donâ€™t forget to equip your astronaut with a buildable space exploration pack, so he could breathe in space!

Tons of building possibilities for your little space dreamer with the LEGO Creator set. 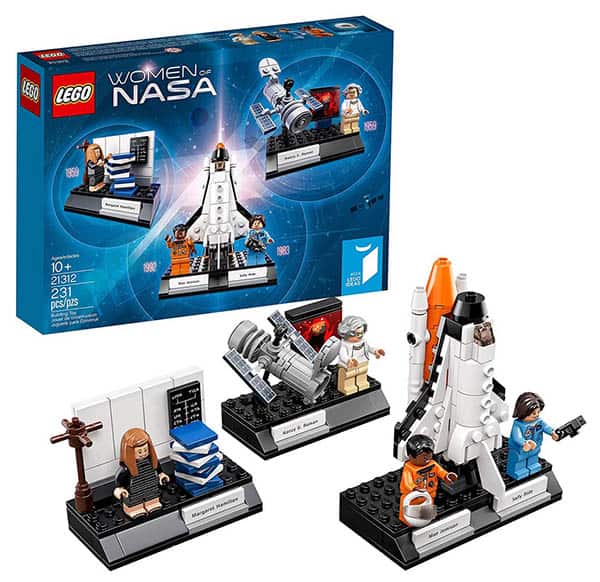 This toy building set by LEGOÂ®, to the greater extent, carries educational purposes, and tells us the story of 4 pioneering women of NASA: Nancy G. Roman (astronomer and educator), Margaret Hamilton (computer scientist and entrepreneur), Sally Ride (physicist and entrepreneur), and Mae Jemison (astronaut, physician and engineer). The groundbreaking knowledge and efforts of these women have made a significant contribution to the history of space science development and meant to inspire our little ones to pursue their scientific dreams.

Each pedestal illustrates the areas of expertise of the team members. Also, the instruction manual has a little biography on each featured woman for those, who want to learn more about these powerful figures.

â€œIf we want scientists and engineers in the future, we should be cultivating the girls as much as the boys.â€ 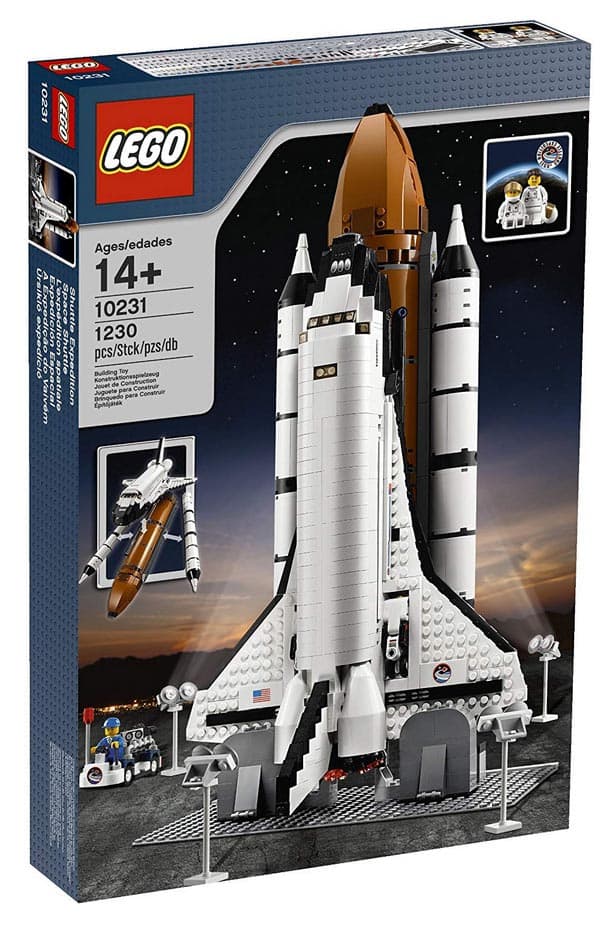 If your child is a space enthusiast, this LEGOÂ® toy set is going to help him learn more about the historical NASAâ€™s Space Shuttle Program and its fleet, which (that) has performed 135 missions, helped construct the International Space Station and inspired generations starting from 1981.

An incredibly detailed model of a shuttle spacecraft allows your child to dive into the remarkable achievements of the brave spacemen and the cutting-edge researches they have conducted for the sake of all humankind.

The shuttle model features realistic fuel tank and 2 booster rockets (detachable). You can open the cargo compartment to reveal the crane that holds the satellite, and deploys it into the orbit of the Earth.

And so, if you want to encourage your childâ€™s interest in space science, and continue the memory of the brave astronauts, consider this toy builder set to enlarge your LEGOÂ® collection. 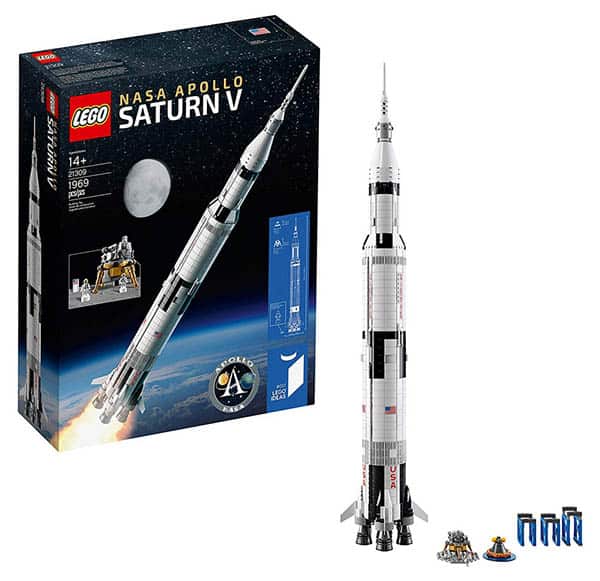 Buckle up, ladies and gentlemen, because your little space dreamer is going to love this one!

Commemorating the 50th Anniversary of the historical NASAâ€™s Apollo Moon landing (1969) this year, LEGO has presented its fans with a meter-high (39â€) incredibly detailed model of Saturn V SA-506 rocket. This is one of the biggest LEGO build sets, which includes almost 2,000 bricks and comes with all necessary equipment for the mission accomplishment.

A multi-stage rocket means that it breaks into pieces, representing the different stages of the original mission. Itâ€™s packed with authentic details and awesome features for role-play recreations of the Moon landing.

The set comes with all the original LEGO pieces, 3 stands (to display the aircraft horizontally), splashdown platform, Lunar module and a crew of 4 astronauts. Together with the building instruction manual, you will find an educational booklet about the manned Apollo Missions to learn more about historical moments of space exploration.

The finished result is an unbelievable masterpiece of LEGO engineering and a fitting tribute to the pioneers that took one small step for [a] man, one giant leap for mankind!

Interesting fact: the number of LEGO pieces in this set is exactly the same as the year of the historic Apollo Moon landing (1969). 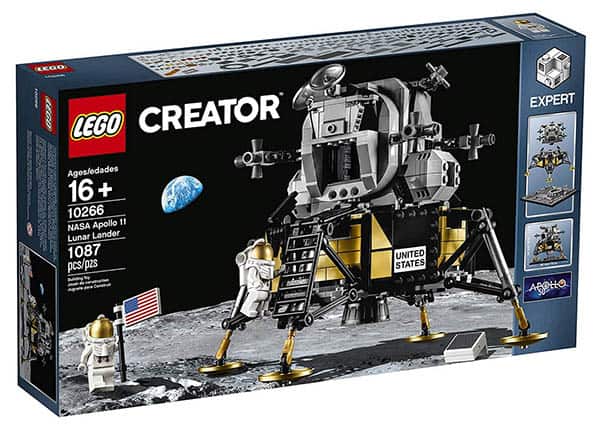 Travel back in time with this LEGO toy set to recreate the historical moment of 1969, when three brave men have successfully landed and left their footprints on the surface of the Moon.

Perfect for a role-play and commemorating the 50th Anniversary of the legendary NASAâ€™s Apollo 11 mission, this toy building set is right on target!

It comes with a very detailed replica of the original Apollo 11â€™s Eagle Lunar module, lunar surface, and a crew of 2 astronauts (Neil Armstrong and Buzz Aldrin) piloting the â€˜Eagleâ€™. While the third member of the crew (Michael Collins) has remained to pilot the Command-and-Service Module (CSM) in the lunar orbit.

All in all, a very impressive construction set full of role-play possibilities for the little aspiring space explorers!

â€œHouston, Tranquility Base here.
The Eagle has landed.
That’s one small step for a man,
one giant leap for mankind.â€ 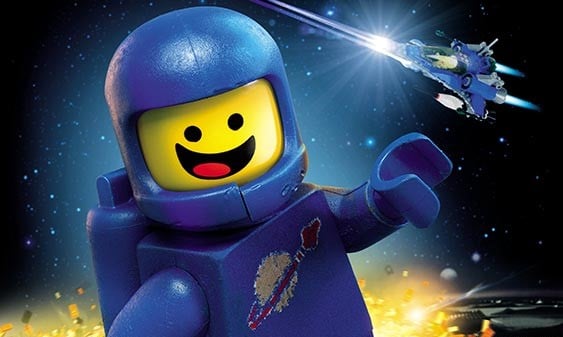 Thanks for checking out this selection, I hope you find it useful and informative. And let me know your thoughts on how it can be improved in the comment section below (e.g. by adding the â€œaverage build timeâ€ parameter to the products, or something like that).